White-faced Sakis, also known as the Guianan Sakis or golden-faced Sakis, live in mountains and rainforests in northeastern South America. They are diurnal tree dwellers and feed mostly on fruits, nuts, seeds and insects. Through their powerful hind legs, they can make very wide jumps and are specialists of swinging from tree to tree. A pair often mates for life.

White-faced Sakis can weigh up to 1.8 kilograms, with the males being significantly larger. Also, by the coloration, the sexes can be easily distinguished. Males have a black coat and the facial area is white. Females are completely brown-gray colored. After a gestation period of five to six months, the female brings a baby to the world, which is then nursed for several months. Only after one year is the young animal independent. Sexual maturity is reached only at three to four years. Young male animals change to the sex-typical white face mask at about two months. They live in family groups consisting of parents and their offspring(s). Amongst each other, they communicate with high chirping sounds reminiscent of bird sounds.

White lions first came to pub­lic atten­tion in the 1970s. These royal ani­mals are not albi­nos. Their white color is cau­sed by a reces­sive gene.… 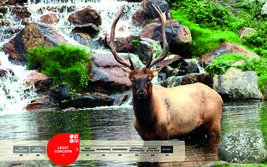 Watch how majestic a Wes­tern red deer is! Anyone who sees a red deer, also known as Wapiti, admi­res its great ant­lers. The stag impres­ses…